Hi All,
I've got a Boilermate 2000 (BM185) connected to a Potterton Suprima 60 in the town house I live in. The boiler is located on the ground floor, and the BM is located on the 2nd floor in an airing cupboard. There are 12 radiators of various sizes attached to the system. The F&E tank is in the loft directly above the BM.

The unit was installed in 2002 when the house was built. Since we moved into the house just over 2 years ago we've had numerous issues with it, mainly due to previous owners not maintaining anything in the house properly. The result was new sensors being fitted to the BM. However, the bigger issues were resolved by fitting a new control board to the Suprima about a year ago. This was despite BG saying there was nothing wrong with the old board as it was the latest revision. Yet when the finally changed it the hassle we had of the boiler going into lockout went away and we finally got a reliable system.

For the most part the system is fine, however reading on these forums it seems my store temperature doesn't get as hot as it should. During normal running the store temp sits at 69C. The Call temp is set around 62C and Satisfied is 69C. If the system is powered off these values get set higher (77/74), but after a few minutes of running the BM adjusts them down to 69/62.

I asked the BG engineer about this when he came to fit the circuit board to the Suprima and said it was because the boiler couldn't supply the water at the temperature the BM was requesting, so the BM adjusts down to values the boiler can supply. He also commented that it didn't help with the boiler being two floors beneath the BM and it was a fairly long pipe run. The pipe run to the boiler is probably about 4 metres, maybe a bit more.

I took a look at the times it took to heat the store this morning and the times were as follows:

As a result of the lower store temp we find that you can just about run one bath before we run out of hot water, and the central heating radiators do seem quite slow to get to temperature.

Would it be worth me attempting to drain the system down and refill it with some X400 for a while? Never fully drained it down, so obviously concerned about doing this. However, we've taken rads off for decorating, and when they've refilled we've observed the F&E tank refills as well, so I think that's ok. 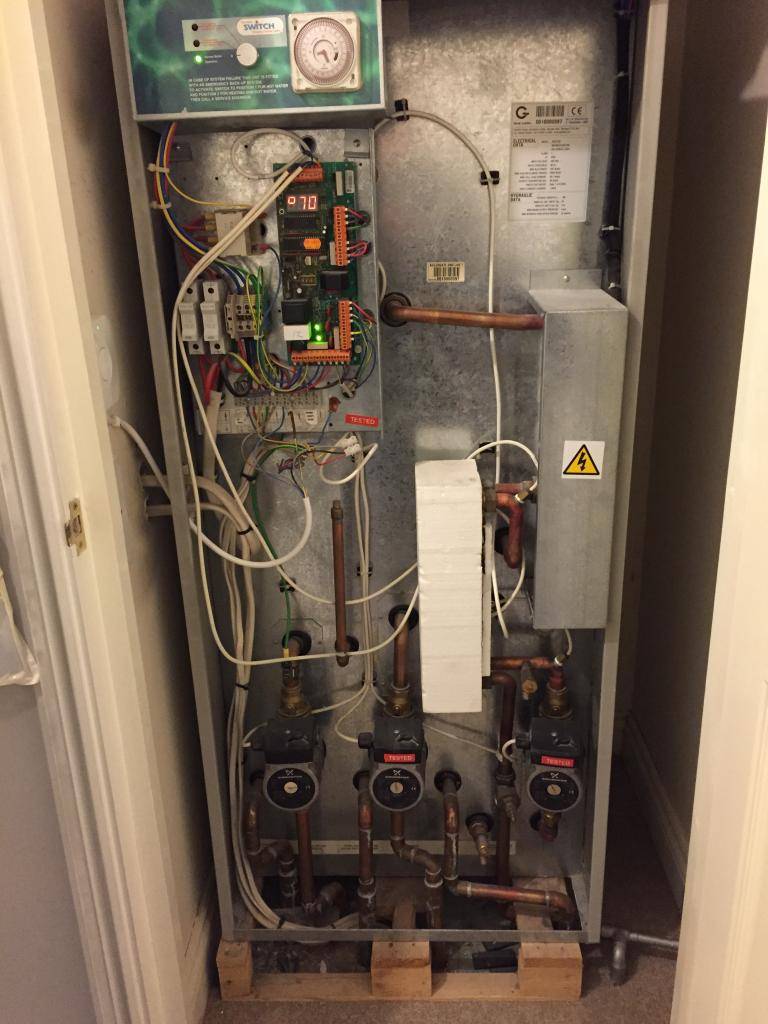 Any advice would be appreciated. Let me know if more info is required.

Draining and cleaning a Boilermate 2000

Well looking at your picture, well done for that!
The flow from the boiler to the unit (left hand pipe) has quite a few bends!
Lots of bends / elbows mean resistance!
Yes it would be a good idea to drain some water from the unit.
Turn off water to F & E tank.
Drain until empty, then continue for at least another 5 to 10 minutes.
Stop draining.
Add at least 3 bottles of cleaner 4 would be better.
On draining and adding the cleaner you must bleed the pumps and any rads etc.
Then run the system.
Do not run the heating for a while.
By doing this the cleaner will concentrate on the boiler and pipe work to the BM 2000. And the BM 2000 too.
If the boiler stops running which it will once hot, run some hot water off and the boiler will fire again.
While the boiler and pump are running cleaner should be working.
Running the DHW will just go through the PHE.
If you can do the above and see any improvement great.
Then run the heating. But as it is cold you may have to use the heating.
Keep it in and watch the reading.
When the time comes or you are ready, the system will need draining in full.
The BM 2000.
The boiler and pipe work.
All the rads.
While draining you can let water into the F & E tank this will help flush out the system.
It is nice to drain until clear / clean water is seen.
After all this. Re fill the system and add at least 3 inhibitor but 4 would be better.
Bleed all the rads and pumps on BM 2000.
A lot of work and time, but can be worth it.
Mike

Many Thanks for the quick response and detailed instructions. Much appreciated.

With regards to bleeding the pumps, is it just a case of loosening the screw on the front of each pump before turning the system on until water starts to dribble out? Or does a pump need to be running before it can be bled?

X400 & X100 are fine.
All bleeding really takes place before switching on.
But once on check again.
And when hot check again.
There may be a rad which collects air more than others.
Mike