I've recently removed my Potterton Suprima 60 from the cupboard it was contained in as I'm preparing for a new kitchen to be installed. Doing this has made me notice some strange behaviour as I can see and hear the boiler more easily now.

The boiler had a new circuit board fitted last year after a string of issues with it locking out (flashing red LED). It also had a new thermistor about 18 months ago. As I've put in a previous post the boiler seems to struggle get the store temp any higher than 69. As a result of advice here I'm currently running the system with 4 bottles of X400 in it.

I've also noticed when looking at the display where it shows "on", the Middle "-" for store is always lit. This is something I've always noticed, and wasn't sure if this "-" would go out when the store temp was satisfied, similar to the DHW and heating -'s.

After a while this process does stop and the boiler eventually does go into standby with a solid Amber light, and then two LEDs go out on the boilermate.

Any ideas why this is happening? I've got British Gas homecare for the system and am prepared to call them out. However I find they always try to blame the boilermate when out of the 5 times previously that I've called them the boiler was at fault 4 of them! So I'd like to be a bit informed about what the issue could be.

Many thanks in advance....

BM 2000 needs to be higher than 70c
It is very likely you have a blockage with in the BM 2000.
I presume the Potterton is on max?
Mike

Yes, the boiler is on max. One of the reasons for putting the 4 x X400 in the system was to try and get the store temperature to increase.

When I drained the system as you previously advised the F&E tank emptied as it should. I was surprised at how clear the drained water was. I was expecting it to be black and grimy.

On re-filling initially the BM refilled very slowly as the F&E tank completely re-filled with only a dribble coming from the tap. After a few minutes the BM re-filled extremely fast as it totally emptied the F&E tank, and the tank remained empty for several minutes despite the F&E tap running at full blast trying to re-fill.

The X400 has been present in the system for about 4 weeks. In that time there has been no increase in the store temperature. I was planning on draining the X400 in about 10 days time.

My neighbour has exactly the same setup. I noticed his BM store temp was higher than mine (73), but that his boiler was also much quieter in operation. My boiler seems to make a noticeable humming noise as soon as it gets a demand for heat, before the burners fire.

If there is a blockage do you think it is within the BM? Or between the BM and boiler? Are both of these issues easily resolvable?

Should the '-' for store go out when the BM thinks the store is up to temperature? or does this bar always stay lit when looking at the "on" screen?

This morning the boiler has been in standby for well over an hour, and while I took the pictures below. I don't know if they're helpful, click on them to enlarge/expand: 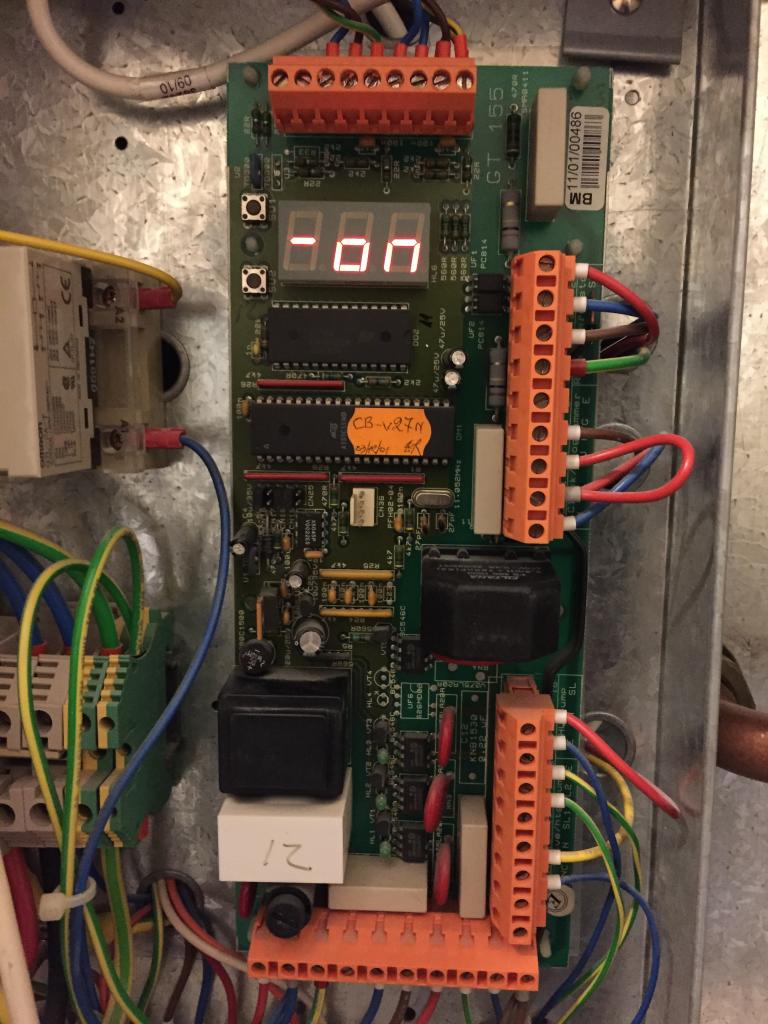 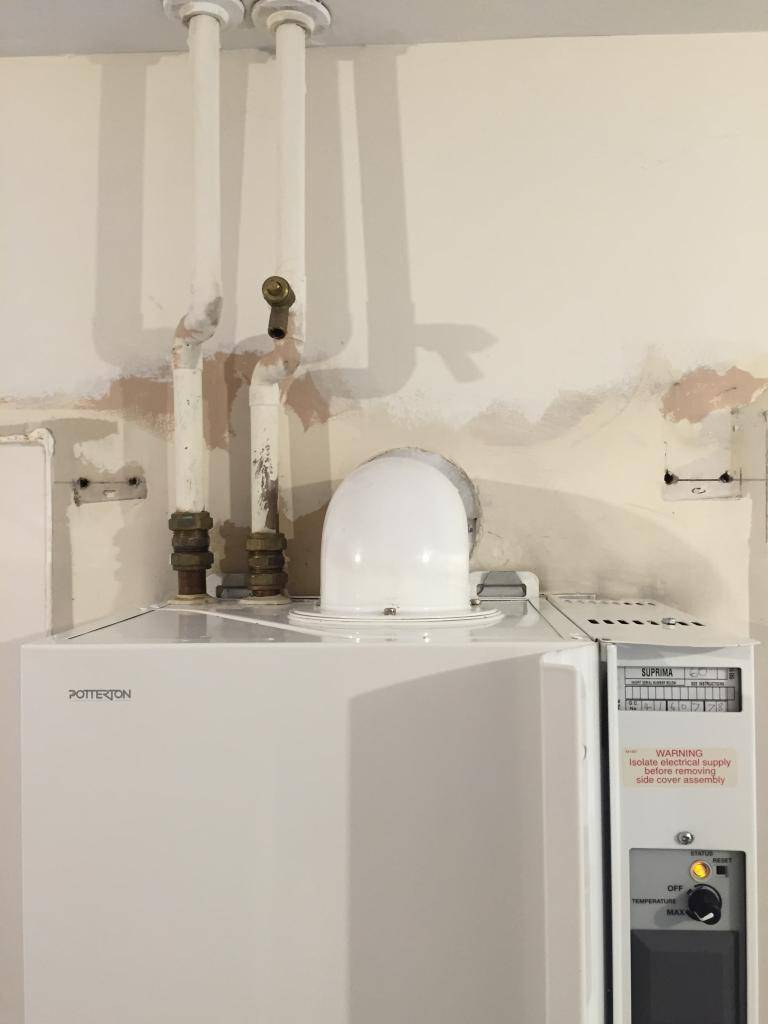 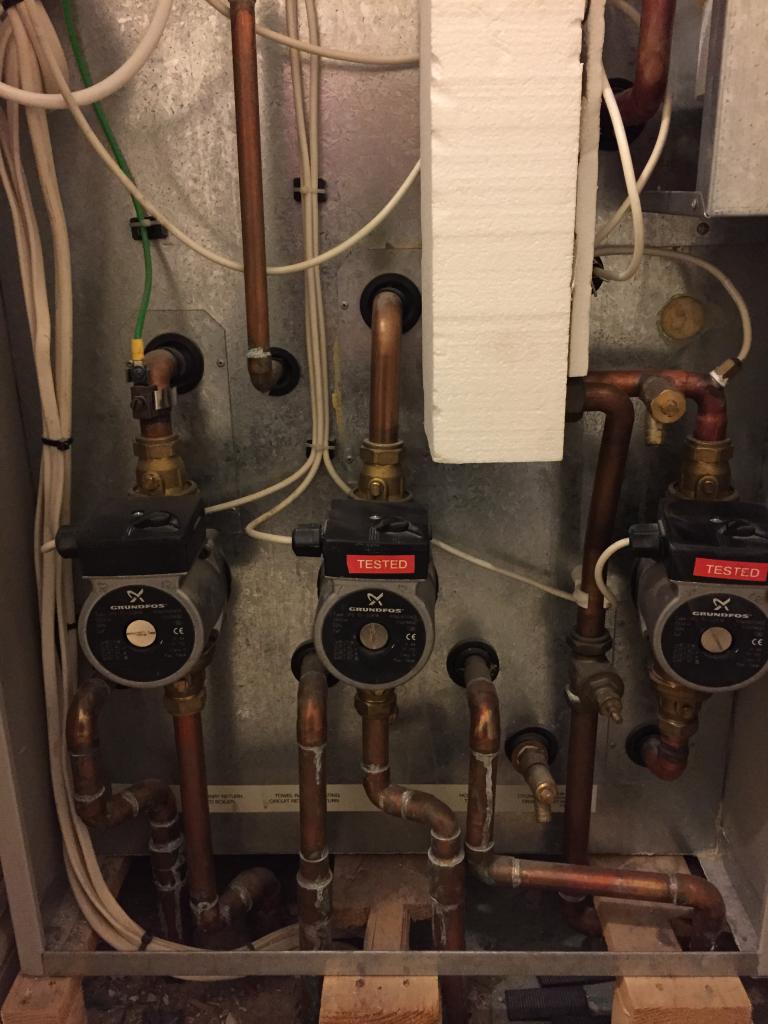 Yes your unit may have filled up quickly.
But there are 2 cylinders inside the BM 2000.
They are linked with a lot of pipes.
So although it will fill.
The flow through certain parts of the unit may be restricted.
I can see the pipe work at the boiler (flow & return) Elbows!
At the unit more elbows!
How many more we can not see.
22 mm pipe and fitting will block up over time to a point where a pencil may fit inside the pipes etc.
I can see that the BM 2000 ACB is an old one. The new Gledhill ones are different now. One of the big chips has gone.
Whether that is a factor I do not know.
Have you tried this?
Make sure jumpers are on 1,3 & 4 (they look correct in your picture.
Turn off unit
Put another jumper on number 5.
Switch on and let the unit go through it's stuff. Matching to the boiler etc.
When the word ON appears.
Turn off.
Remove jumper 5
Turn on and see how that goes.
Boiler pump? Ok? Noisy? Powerful can you stop it with your finger?
Your boiler is most likely clogged / scaled up too.
Mike

For the flow & return pipework to the boiler there will be at least two more elbows. The BM is situated in an airing cupboard in the middle of the house on the top floor. The boiler is on an external wall on the ground floor. So the pipework will have to do another 90 degree turn to run along the floor and then another 90 degrees to go downstairs to the boiler.

I had issues with the boiler about 2 years ago where it kept locking out. British Gas were also concerned that the store temp never rose above 69/70C. As the boiler had the revised Siemens PCB on it British Gas refused to believe that was where the fault lie. So they replaced the BM ACB with a new one. I do remember it looking different, and had a red LED on the board that remained permanently lit when the unit was powered. However, this made no difference. The end result was they put the original ACB back, and replaced the PCB on the boiler and that solved the lockout issues.

In an effort to increase the store temperature, the BG engineer tried to make the boiler "blow out" (can't remember the exact term he used) by disabling its thermostat(?)... and then forcing the boiler to run... he said doing that would cause it blow the sludge up into the header tank. It made a lot of noise whatever it did, however it didn't make any improvement to store temperature. At that point he gave up. Most of the BG engineers that get sent out seem to know very little of how the BM works.

I did notice before draining some water out of the system a few weeks ago that the F&E tank had a coating of brown 'gunk' around the edges and on the bottom. It was easily disturbed and bits floated about in the water. I completely cleaned all of this out from the F&E tank before commencing any draining down. Wasn't sure if this would've been present due to what the BG engineer did with the boiler.

I tried opening the drain valve above the boiler this morning. The pipes are marked on top of the boiler as F & R, the pipe with the drain valve is marked as R. I wanted to see if there was a good flow of water on that pipe. However opening it does nothing. I'd read these can be prone to sticking, so I'm not going to poke about with it too much.

The jumpers on the ACB are in the correct position, and I had already tried adding jumper 5 to get it to re-initialise. I did it again this morning and posted a link of the procedure the ACB goes through here: https://youtu.be/8GEjUe4DD9k. To me it looks normal. What you can't hear easily in the video is that at the point LEDs 2 and 3 light up it triggers the pumps to run.

The boiler pump is not noisy. I took the large silver screw off this morning. The water that came out was slightly dirty, so I'm hoping the X400 has done some good. When the pump was running I couldn't stop it with my finger and it was spinning quickly.

Right this is what I would do next.
Turn off unit.
Turn off water to header tank.
Drain unit via low DOC.
Or via a ground floor DOC.
Now I can see the pipes are soldered direct to the unit.
I use compression to connect to the unit (not speed fit etc).
I would remove the flow and return from the unit or disconnect near to the unit.
I would make up fittings from 22 mm to 15 mm.
To one I would connect mains pressure cold water. (header tank supply or garden hose)
To the other a hose to drain, but I would want to see it or if not put tights over the hose end to drain.
Flush water into the boiler and back up through the hose to drain.
I have done this before and been very successful. But you will not know unless you try!
You have had the cleaner in so that is a help.
All this is very time consuming though and could be in vain.
Boiler & unit are getting old.
And you can guarantee that NOT enough inhibitor was ever put in from day one!
So the clock has been ticking. The evidence is in the header tank.
If you email at;
mg.c@hotmail.co.uk
I will send you some pictures of the BM 2000 out of it's case.
When I get time I will post on here all I have.
Or if not on my face book page.
Details of which later.
Mike