Wiring query before replacing ACB and noise before the fault

Wiring query before replacing ACB and noise before the fault

This morning we were woken by a series of knocks from the heating when it came on.  The radiators didn't come on.  A noise was coming from our Boilermate 2000 that sounded like an alternating high/low/high/low.  It sounded to me like a motor trying to start but being stuck, switching between two speeds.  I turned off the heating timer and the noise stopped.  I tried turning it on again a while later to the same effect.  I tried turning the whole unit off and on again.  A pump was then running but I couldn't hear the odd noise anymore, but the heating didn't come on.
I recorded the sound on drive.google.com /open?id=0B-80ExqiFEGZcVprekNKdVRyQjQ (MP3) (The forum won't let me post that as a link. Take out the space between ".com" and "/open" to get it to open)

Having researched further, I took the cover off the unit to see that the display was "-on" with all 3 green LEDs on.  The pump running was the DHW pump, no others.  Turning on the heating timer had no effect.  The switches beside the display have no effect.
This matches a description on another post here with resolution to replace the ACB.
For now, I've turned the unit off.

Before replacing the ACB, however, I would like to ask your opinion on the wiring.  I noticed that a small red wire is sat on top of one of the pumps.  If the wire had been there for a long time, I would have expected to lift it up and see a gap in the dust underneath.  However, there wasn't.  This had me thinking that the wire hasn't been there long, although it did have dust on it, too.

Comparing the wiring to the diagram stuck to the inside of the cover of the unit, I can't see any place that this would be missing from, but please let me know if something looks out of place from your experience. 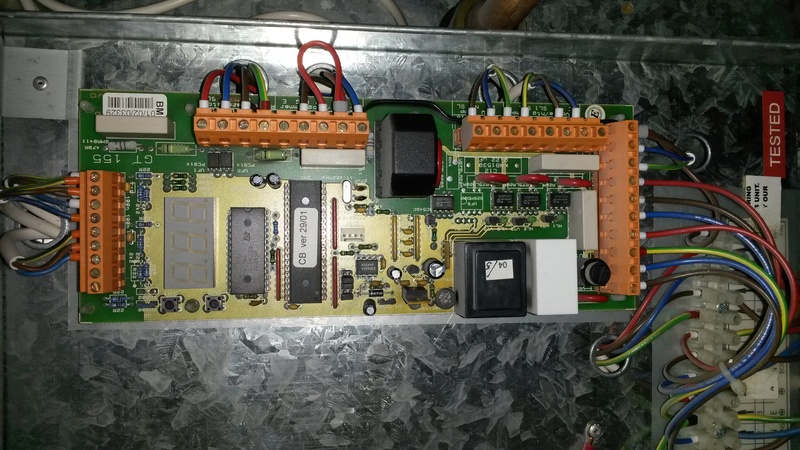 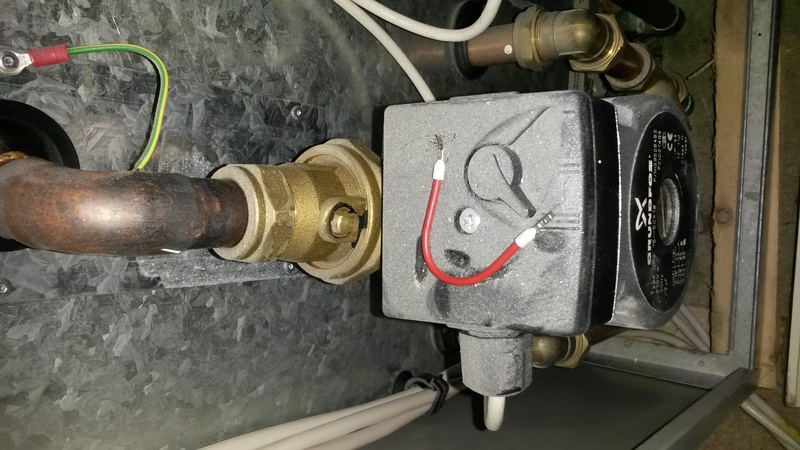 Finally, I think it wise to call a local plumber to test the heating pump before I put in a new ACB, in case it just causes the same thing to happen again.  Although I can see how I could bypass the ACB to get power to the pump to test it coming on, I'm not confident to do it myself. I've also seen from the pump documentation how to manually test the rotation, but again I'm not confident about isolating it to try that.  Is this kind of wiring test something that I should seek a plumber to do, or is that best for an electrician?

Many thanks for any advice that you can give.

The red wire is a link wire which was removed when installing the unit.
Room stat fitted? If not the link would be there.

If your heating pump is running even with the timer and room stat turned off / down.
The it is the main ACB

I can see you have an old one.

The new ones are different.

mike wrote:The red wire is a link wire which was removed when installing the unit.
Room stat fitted? If not the link would be there.

If your heating pump is running even with the timer and room stat turned off / down.
The it is the main ACB

I can see you have an old one.

The new ones are different.

Thank you, Mike. Having had the pumps checked, I replaced the ACB with a like-for-like. It now works! I'm in Cheltenham, Gloucester.

However, it has its min/max temperatures set to 74/77 when turned on and my boiler decides that it has reached max temperature at 75. Having turned the unit off/on it stated 70/77, but after running for a while says 74/77 again. Do you know any way that I can get it to lower that 77? The boiler is set to maximum and has been recently serviced, but it is quite small and old.
I assume that the old ACB had adjusted itself to match the boiler's ability (or decline!) over time.

I can't seem to find any mention of this elsewhere on the forums.

Make sure the boiler pump ( left hand one) is on setting 3.
And your boiler might be able to range rate the boiler to give more output.
Also you could try a few bottles of silencer in the system.
That may help your boiler a bit more.
No you can not alter the ACB settings

New out
Info came today, might be worth looking at

Thank you, that's very helpful. You're providing a great service with this forum.
After running the central heating for a while, the store has occasionally reached 77 now, so I'll look at an additive to make that more efficient.

That Thermoboost looks promising. I'll give them a call to find out about stockists. There are a few listed online but I can't see it listed on any general stores like screwfix.